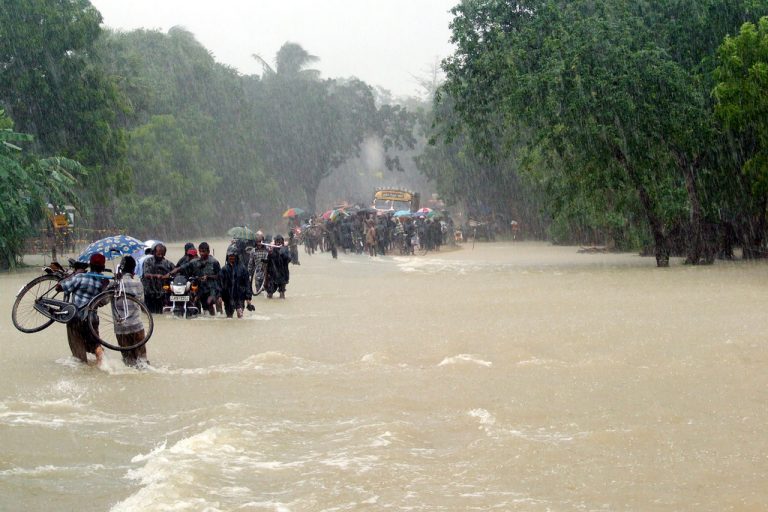 As climate change alters long-term weather patterns and leads to increasing droughts, floods, and storms, more and more people are turned into climate migrants and refugees.

During 2010 and 2011, climate-related disasters have displaced around 42 million people in Asia and the Pacific alone, more than twice the population of Sri Lanka. Climate change will create even larger numbers of climate refugees around the world: most estimates range around 100-200 million people by 2050, while some go up to one billion.

Considering these staggering statistics, it is difficult to understand that few countries have national policies to address climate-induced displacement and migration, and that climate refugees lack international legal protection.

Refugees and Migrants in a Changing Climate

Refugees are forcefully displaced persons, and they are protected by international law enshrined in the 1951 Refugee Convention as well as subsequent protocols and conventions. They are able to seek asylum, and countries have a responsibility to ensure their safety.

Migrants, on the other hand, are not threatened by persecution, death or imprisonment if they return to their home countries. If they move across borders, they are subject to national immigration procedures and laws: but the majority is migrating from rural to urban areas within their countries. They move for temporary work opportunities, the reunited with their families or as part of cyclical rural-urban exchange patterns. There are social, political, economic, demographic, and environmental drivers for migration, and a combination of them usually leads to the decision to move.

Environmental degradation adds to other migration drivers and can tip the scales, and climate change can aggravate existing tensions or even lead to conflicts itself when water and other resources become scarce.

Climate migrants face existential risks to their lives and livelihoods, but unlike those fleeing violent conflict, they cannot seek asylum and have no international legal protection. Their home might literally sink into the ocean, but they are not recognised by international law and can be turned away at any country’s discretion.

In 2017, 30.6 million new people have been internally displaced, 18.8 million of them (61%) due to extreme weather events and disasters, predominantly floods and tropical storms (85%). Of these 18.8 million, 8.6 million are located in Asia and the Pacific, and 2.8 million in South Asia alone: and this does not include migration due to slow-onset events. Not since the end of the Second World War have so many people been on the move world-wide, and the numbers are only projected to rise.

The number of climate migrants is predicted to become six times higher between 2020 and 2050, and one in every four internal migrants could be a climate migrant. Tens of millions of people in South Asia will be forced to move internally due to slow-onset impacts of climate change, leaving their homes when the rains become unreliable, the soil is no longer fertile or floods and storm surges threaten their lives.

Migration is not always negative and can in fact be a proactive solution and a successful adaptation strategy: but in most cases, the forced displacement of farmers, their families, and poor rural populations only increases their vulnerability and place a heavy strain on the areas to which they migrate.

Around a quarter of the world’s population lives in South Asia, and the region is predicted to experience the strongest climate change impacts and disasters. Almost half the region’s population lives in areas that will become moderate to severe climate hotspots by 2050, and most of them are already characterised by poverty and poor infrastructure.

South Asian countries have a high dependency on rain-fed agriculture, a large rural population, and high population density, especially along the coasts. There is already sizeable internal and international migration, in part because increasing development has increased mobility (and mobility for women in particular).

Rising temperatures and sea levels, changing rainfall and monsoon patterns, and tropical storms will lead to great numbers of climate migrants in South Asia. The direction of internal and international migration goes toward cities and will continue to do so. Emerging and existent urban regions, most of them coastal, struggle with infrastructural challenges and have large populations living in unprotected, densely populated slums that are vulnerable to flooding and sanitary issues.

For example, climate migrants already make up 30% of Dhaka’s population, and it is estimated that 22 out of 32 major cities in India will experience daily water shortages in the next decades.

Sri Lanka is one of the main countries of origin for migration within Asia. Like the Philippines, Sri Lanka has a robust framework for temporary labour migration, which was solidified with the start of the Colombo Process in 2003. Migrant worker remittances are a key source of income for Sri Lanka and amounted to 8% of the total GDP in 2013.

The majority of international Sri Lankan migrants are now women, and while their main driver for migration might be economic, it is undeniable that the changing climate adds pressure and makes other employment options in their home areas unviable.

Without decisive action, hundreds of millions of climate migrants and refugees might be on the move by 2050, driven from their homes by disasters and the slow-onset impacts of climate change. The poorest, most vulnerable populations are facing the greatest risks, and South Asia will be one of the most severely affected regions.

To protect climate migrants and refugees, the international legal framework needs to be expanded and climate events recognised as grounds for refugee status. Except for Afghanistan, no country in South Asia, including Sri Lanka, has signed the 1951 Refugee Convention or its 1967 protocol, adding another obstacle to legal protection for climate refugees.

Furthermore, governments need to mainstream climate displacement into all development planning and allocate resources for disaster response measures such as food or cash transfers. Cities and urban regions need to prepare for an increased influx of people and provide housing, transportation infrastructure, employment opportunities, and social services.

We already know where the main migration corridors will be within, between, and beyond Sri Lanka and South Asia, and we know that climate change will lead to a great increase in displacement and forced migration.

International and national laws need to be amended to cover those impacted and displaced by climate change, and governments need to develop national policies to address the issues of migrating due to climate change. It is high time to support and protect the people on the move or displaced against their will, whether they are fleeing conflict, escaping disasters, or adapting to the impacts of global climate change.

Asian Development Bank (2018): Addressing Climate Change and Migration in Asia and the Pacific.

Environmental Justice Foundation (2017): Beyond Borders. Our Changing Climate—Its Role in Conflict and Displacement.

Ginnetti, Justin, and Lavell, Chris (2015): The Risk of Disaster-Induced Displacement in South Asia.